Laughter Yoga?! How This Phenomenon Can Improve Your Health 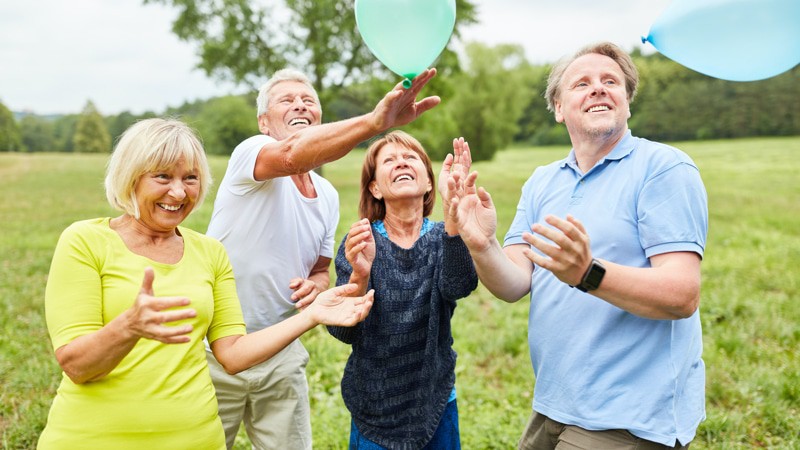 Yoga became popular in the United States in the 1960s and 1970s, and today, about 36 millions Americans practice it. Twenty one percent of yoga practitioners are over 60. In addition to traditional yoga, Americans practice a slew of unconventional yoga variations. Hot yoga. Goat yoga. Beer yoga. But have you heard about laughter yoga?

What Is Laughter Yoga?

Laughter yoga, also called Hasya yoga, was invented in India in 1995 by physician Dr. Madan Kataria. It’s a blend of breathing techniques, laughter exercises, and meditation, and the main goal is to reap the health benefits of laughter. A laughter yoga class will participate in improv sessions, pantomime, or simply laughing “for no reason.” The body can’t tell the difference between faux laughter and the real thing, so you can still benefit from a forced laugh. Laughter yoga sessions often start with a “fake it ‘til you make it” mentality, but usually end in genuine laughter.

While practitioners may get some physical exercise from some of the pantomime activity – yogis may participate in scenes like pretending to flap like seagulls on a beach or riding imaginary bicycles – most of the workout is mental. With no complex yoga poses to master, laughter yoga is a low-impact exercise. Certified yoga instructor and health psychologist Roger Cole compares laughter yoga and its more serious version: “The idea that putting a posture, as it were, on your face – a smile ­– is an idea that’s not foreign to yoga.”

Researchers, perhaps testing the adage that laughter is the best medicine, have been studying the effects of laughter yoga. In 2016, doctors studied patients with Parkinson’s disease and their caregivers, and found that laughter yoga benefited both groups. It improved their stress levels and contributed to a more positive outlook. The Parkinson’s disease patients were especially keen on laughter yoga because it was like “exercise for the face.” Since one of the symptoms of Parkinson’s is a “stiff face,” that aspect was very appealing for this group.

A 2014 Iranian study of pre-chemotherapy cancer patients found that the laughter yoga resulted in increased endorphin secretion in these patients, which alleviated stress and anxiety, and provided a small amount of pain relief.

A 2019 study focused on laughter yoga’s effects on clinical nurses. These nurses, who have high rates of stress and emotional exhaustion, responded well to laughter yoga, with 74% seeing lower rates of compassion fatigue after participating in eight 30-minute sessions of laughter yoga over two months.

It Can Improve Your Mood

Laughing improves your psychological well-being. Jeffery Briar, the founder of the Laughter Yoga Institute, touts the practice’s ability to immediately lift your spirits. By taking a deep breath and laughing in the face of a tense situation, he boasts, “I can laugh myself out of stress in as little as 20 seconds.” Laughing when faced with challenges helps you create a positive mindset. A laughter yoga session also includes yoga-inspired deep breathing, which oxygenates your body and brain, making you feel more energetic.

According to Laughter Yoga University, laughing can boost your immune system and improve your memory. Studies in India and the United States have shown that laughter yoga can lower your blood pressure by 6%. While laughing, more blood flows to the internal organs, your heart and respiratory rates and oxygen consumption increase. Afterwards, there is a healthy decrease in heart and respiratory rates. This is similar to how the body reacts to exercise. While laughter yoga is a low-impact exercise, it does take muscles to laugh. Laughing contracts the abdominal muscles and gives the facial muscles a workout.

A dog can make a wonderful companion, no matter your age. But age and lifestyle also influence what kind of ...
[Read More]