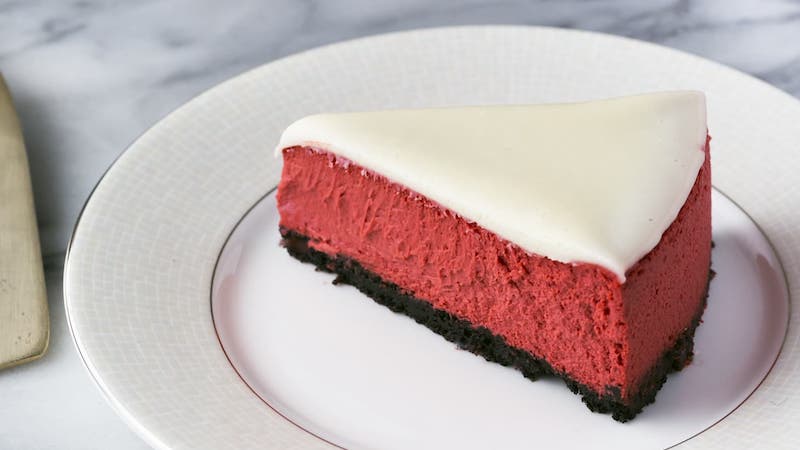 In the world of cakes, red velvet demands your attention. Special occasions call for cake, but red velvet is the special occasion. There’s something so celebratory about it. Cheesecake has a similar status – it’s not an everyday bake, and the thought of it suggests a bit of indulgence. Combining the two in this red velvet cheesecake gives you a stunning dessert that is a little over-the-top in the best way.

Red velvet cheesecake is a play on the traditional layer cake. A red velvet cake is a fluffy, cocoa-scented cake that’s layered with a cream cheese or boiled milk buttercream. For this cheesecake version, I filled a chocolate cookie crust with a buttermilk-spiked and cocoa-scented cheesecake filling. Instead of doubling down with a cream cheese frosting, I wanted to go for that milky white flavor for both flavor and color contrast. Buttercream didn’t feel right. (Straight from the fridge, it’s too firm of a contrast against the silky-smooth cheesecake.) Instead, I pour over a simple two-ingredient white chocolate ganache.

How do I bake a creamy, crack-free cheesecake?

Because this is a red velvet cheesecake, I really wanted a smooth, velvety texture. My first version I mixed up was full of air, but switching to a food processor changed this drastically. Once I had the texture figured out, I needed to think about cracking. Cracks in cheesecake are common, and occur from either over-baking or trying to rush the cooling after the cheesecake is baked.

For the best texture, I found the following tips to be helpful:

Can I make cheesecake ahead of time?

Cheesecake should not be eaten before fully chilling, meaning it’s the perfect dessert to make ahead because it almost requires it! Making cheesecake isn’t hard, but does require patience once it’s in the oven. The low baking temperature and intentional cooling take several hours. But once the cheesecake is in the refrigerator, it will patiently wait for you for up to three days.

For the crust and filling:

Recipe note: Cheesecake can be refrigerated, well covered, for up to four days.

Meleyna Nomura is a contributor to TheKitchn.com, a nationally known blog for people who love food and home cooking. Submit any comments or questions to editorial@thekitchn.com. 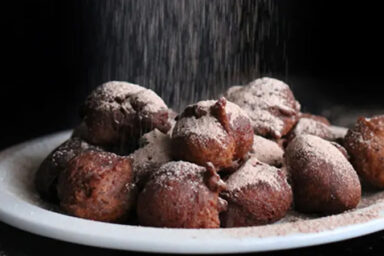 Looking for a leftover turkey dish that will get the whole family excited? Give leftovers new life with these delicious ...
[Read More] 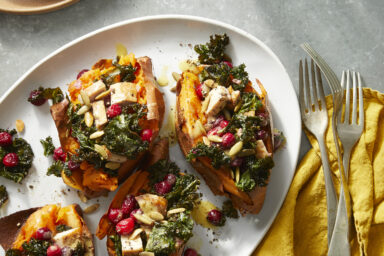