The Best Creamed Spinach Can Be Life-Changing 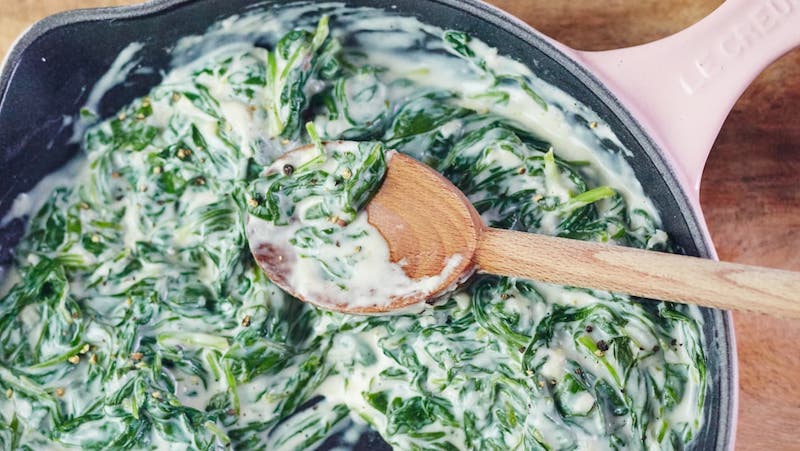 That’s because good creamed spinach is nothing like the spinach you find wilting in a buffet tray. Good creamed spinach is pure luxury for your taste buds. It’s tender cooked spinach swathed in a gentle sauce of aromatics and fresh spices, with just enough creamy half-and-half and grated Parmesan cheese to hold the leaves together in an irresistibly savory sauce.

The best spinach for creamed spinach

Fresh baby spinach is best for making creamed spinach. Because it is already tender and less bitter than full-grown spinach, it requires less cooking and adds a creaminess to the finished dish. I also prefer to use baby spinach, as most bagged varieties are 10 ounces, which is the perfect amount for this recipe. If you’ve got full-sized leaves, feel free to use them — just chop them into bite-sized pieces before proceeding.

Can you use frozen spinach instead of fresh?

Yes! Thaw a 10-ounce package of frozen spinach and drain well. Make the cream sauce and add the thawed and drained spinach until heated through.

The spinach for creamed spinach needs to be cooked before making the cream sauce. Blanching, a quick dip in a boiling water followed by a cool ice bath, is the preferred method for locking in color and tenderizing the spinach. You could saute or even steam the spinach, but I’ve found that blanching cooks faster and more evenly — especially if you are cooking a large batch of spinach.

However, since both the boiling and the ice bath make the spinach wet, this moisture needs to be squeezed off to ensure a creamy, not watery, creamed spinach. Use the same colander you drained the spinach in to press out the excess moisture before adding the spinach to the cream sauce.

Do I really have to cook the spinach first?

The short answer is “yes.” You might be thinking, “Oh, the spinach will just wilt in the cream sauce, I don’t really need to cook it first!” Unfortunately, having thought the same thing myself, I have found the cooking and draining of the spinach before making the cream sauce to be critical. The spinach releases more water than you might think and makes a soupy, rather than creamy, sauce.

No cream in the best creamed spinach

You were expecting cream in this recipe or maybe even cream cheese, but both of these ingredients make for a dense, rather than smooth and creamy, creamed spinach. Instead, a combination of half-and-half and grated Parmesan cheese make a sauce that is both luxuriously creamy and still light. You could certainly try another hard, salty cheese here such as Pecorino Romano or an aged Manchego if you have either of those on hand.

As for the other flavorings, onions and garlic are quintessential creamed spinach aromatics, but you can play around a bit with the dried spices. I love a little nutmeg (brings out the nuttiness of the cheese), and the dry mustard and cayenne make the dish taste brighter with their touch of acidity, but you can certainly skip or substitute any of these as desired.

Can you thicken creamed spinach?

This creamed spinach is thickened with the help of a little flour, which is sprinkled over the onion mixture before the half-and-half is added. You’ll then cook the mixture until it thickens enough to coat the back of the spatula.

Spinach shortcut: Instead of blanching fresh spinach, thaw a 10-ounce package of frozen spinach and drain well. Make the cream sauce and add the thawed and drained spinach until heated through.

Make Ahead: You can make this best creamed spinach up to one day ahead. Press plastic wrap or parchment paper directly onto the surface to prevent a skin from forming. Cool to room temperature and then refrigerate. When ready to proceed, remove the plastic wrap and reheat over low heat until it just begins to bubble.

Storage: Store leftover creamed spinach in the fridge for up to three days. Reheat gently over low heat.

Meghan Splawn is the food editor for Kitchn’s Skills content at TheKitchn.com, a nationally known blog for people who love food and home cooking. Submit any comments or questions to editorial@thekitchn.com

Related: The best foods to prevent osteoporosis include … spinach!

With a double dose of fruit, peach tea bread is peachy keen: diced in the batter and sliced on top, ...
[Read More] 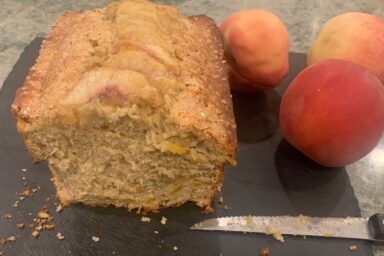 If you like store-bought tzatziki, wait till you try this DIY tzatziki! Easy, delicious, healthy, fresh, made with cucumbers, Greek ...
[Read More] 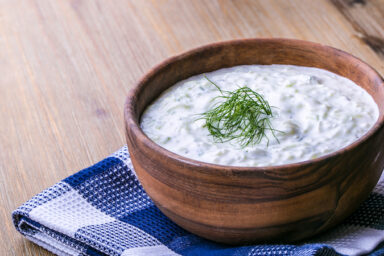