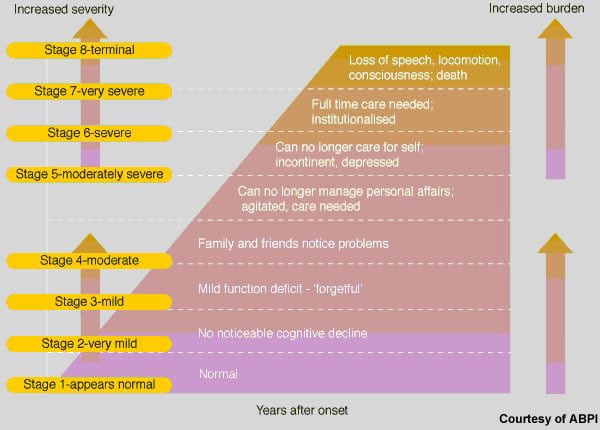 Experts have documented common patterns of symptom progression that occur in many individuals with Alzheimer’s disease and developed several methods of “staging” based on these patterns. Progression of symptoms corresponds in a general way to the underlying nerve cell degeneration that takes place in Alzheimer’s disease.

Nerve cell damage typically begins with cells involved in learning and memory and gradually spreads to cells that control other aspects of thinking, judgment and behavior. The damage eventually affects cells that control and coordinate movement.

Staging systems provide useful frames of reference for understanding how the disease may unfold and for making future plans. But it is important to note that all stages are artificial benchmarks in a continuous process that can vary greatly from one person to another. Not everyone will experience every symptom and symptoms may occur at different times in different individuals. People with Alzheimer’s die an average of four to six years after diagnosis, but the duration of the disease can vary from three to 20 years.

The framework for this fact sheet is a system that outlines key symptoms characterizing seven stages ranging from unimpaired function to very severe cognitive decline. This framework is based on a system developed by Barry Reisberg, M.D., Clinical Director of the New York University School of Medicine’s Silberstein Aging and Dementia Research Center.

Within this framework, we have noted which stages correspond to the widely used concepts of mild, moderate, moderately severe and severe Alzheimer’s disease. We have also noted which stages fall within the more general divisions of early-stage, mid-stage and late-stage categories.

Stage 1: No cognitive impairment
Unimpaired individuals experience no memory problems and none are evident to a health care professional during a medical interview.

Stage 2: Very mild decline
Individuals at this stage feel as if they have memory lapses, forgetting familiar words or names or the location of keys, eyeglasses or other everyday objects. But these problems are not evident during a medical examination or apparent to friends, family or co-workers.

Stage 3: Mild cognitive decline
c Early-stage Alzheimer’s can be diagnosed in some, but not all, individuals with these symptoms

Friends, family or co-workers begin to notice deficiencies. Problems with memory or concentration may be measurable in clinical testing or discernible during a detailed medical interview. Common difficulties include:

At this stage, a careful medical interview detects clear-cut deficiencies in the following areas:

• Decreased knowledge of recent events
• Impaired ability to perform challenging mental arithmetic. For example, to count backward from 100 by 7s
• Decreased capacity to perform complex tasks, such as marketing, planning dinner for guests, or paying bills and managing finances
• Reduced memory of personal history
• The affected individual may seem subdued and withdrawn, especially in socially or mentally challenging situations

Major gaps in memory and deficits in cognitive function emerge. Some assistance with day-to- day activities becomes essential. At this stage, individuals may:
• Be unable during a medical interview to recall such important details as their current address, their telephone number, or the name of the college or high school from which they graduated
• Become confused about where they are or about the date, day of the week or season
• Have trouble with less challenging mental arithmetic; for example, counting backward from 40 by 4s or from 20 by 2s
• Need help choosing proper clothing for the season or the occasion
• Usually retain substantial knowledge about themselves and know their own name and the names of their spouse or children
• Usually require no assistance with eating or using the toilet

Memory difficulties continue to worsen, significant personality changes may emerge, and affected individuals need extensive help with daily activities. At this stage, individuals may:
• Lose most awareness of recent experiences and events as well as of their surroundings
• Recollect their personal history imperfectly, although they generally recall their own name
• Occasionally forget the name of their spouse or primary caregiver but generally can distinguish familiar from unfamiliar faces
• Need help getting dressed properly; without supervision, may make such errors as putting pajamas over daytime clothes or shoes on wrong feet
• Experience disruption of their normal sleep/waking cycle
• Need help with handling details of toileting (flushing toilet, wiping and disposing of tissue properly)
• Have increasing episodes of urinary or fecal incontinence
• Experience significant personality changes and behavioral symptoms, including suspiciousness and delusions (for example, believing that their caregiver is an impostor); hallucinations (seeing or hearing things that are not really there); or compulsive, repetitive behaviors such as hand-wringing or tissue shredding
• Tend to wander and become lost

• Frequently individuals lose their capacity for recognizable speech, although words or phrases may occasionally be uttered
• Individuals need help with eating and toileting and there is general incontinence .

The Alzheimer’s Association is the leading voluntary health organization in Alzheimer care, support and research. 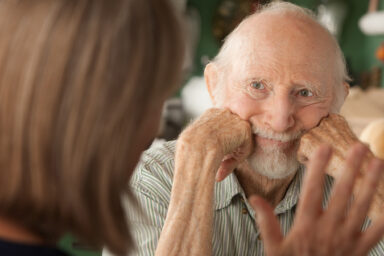